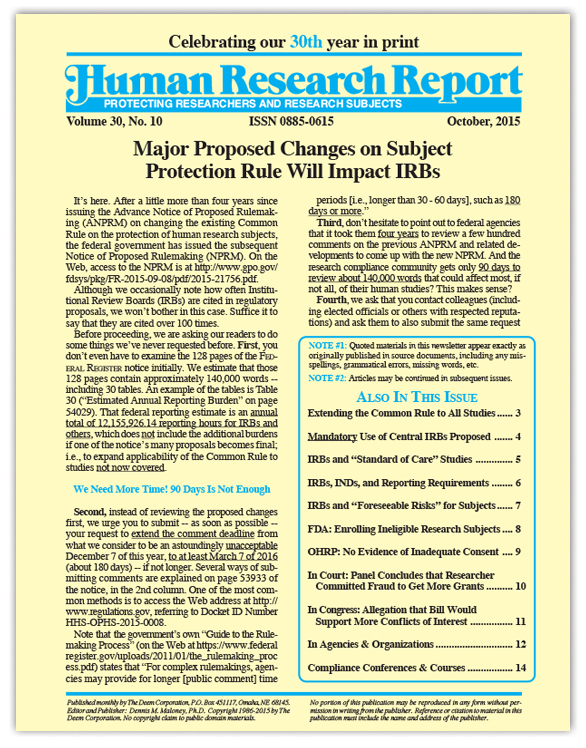 Extending the Common Rule To All Applicable Studies … p. 3

“b. Current Rule
The Common Rule applies to all research in- volving human subjects that is conducted or sup- ported by a Federal department or agency that has adopted the policy (ç .101(a)).

c. ANPRM [2011 Advance Notice of Proposed Rulemaking] Discussion
The ANPRM discussed the possibility of the Common Rule applying to all studies, regardless of funding source, that are conducted by a U.S. institution that receives some federal funding for human subjects research from a Common Rule “ (80 Fed. Reg. 53933-54061 at p. 53989, emphasis added).

Common Rule Changes Include Mandatory Use
of Central IRB … p. 4

As we continue our coverage of the recent major proposal to revise human subject protection regulations, we turn to a controversial topic that we have addressed previously. That topic is the mandated requirement to use ONE Institutional Review Board (IRB) to review protocols of multisite studies. This requirement was proposed in the 2011 Advance Notice of Proposed Rulemaking (ANPRM) and again separately in a proposal by the National Institutes of Health (NIH) late last year. In the recent NPRM, the government states:

“These issues attracted a large number of comments to the 2011 ANPRM, and revealed nearly evenly divided perspectives. Investigators and disease advocacy groups tended to favor the single IRB review requirement. IRB and institutional representatives tended to be opposed to the possible requirement, though many indicated single IRB review should be encouraged” (80 Fed. Reg. 53933-54061 at page 53983, emphasis added).

IRBs and Draft Guidance on “Standard of Care” Studies … p. 5

As discussed elsewhere in this HRR and in past HRRs, the topics of “standard of care” and “reasonably foreseeable risks” continue to pose problems for Institutional Review Boards and researchers. The core challenges are the problems posed by insufficient explanations in informed consent of all risks, especially when more than one “standard of care” is studied.

Even more complicated are the problems posed by randomized placebo-controlled trials, despite the traditional view that such trial designs represent the “gold standard” for truly assessing efficacy while still protecting human research subjects.

We have presented and will continue to present opposing views on these issues, including those of leading consumer and patient advocacy groups such as Public Citizen. However, we now switch to a federal office proposal released on October 24 of last year that became the focus of much of these discussions. In turn, that proposed guidance was based in large part on a public meeting held by the Office for Human Research Protections (OHRP).