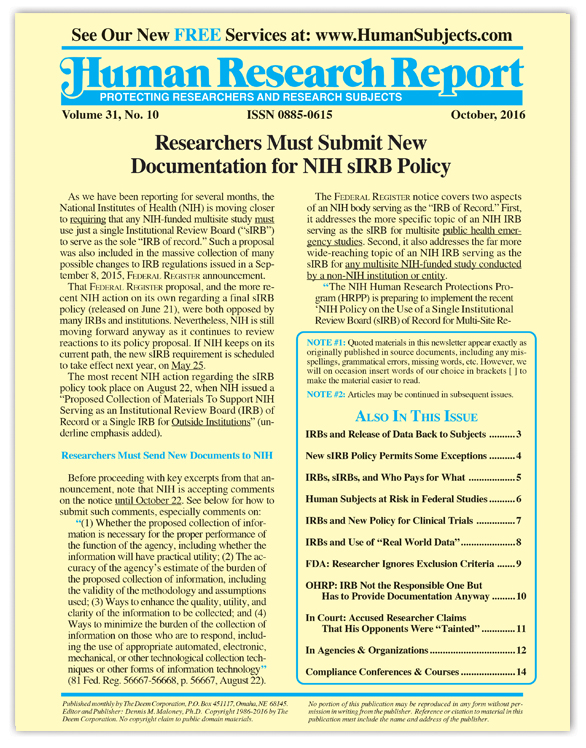 IRBs and Release of Data Back to Subjects … p. 3
New sIRB Policy Permits Some Exceptions … p. 4
IRBs, sIRBs, and Who Pays for What … p. 5
Human Subjects at Risk in Federal Studies … p. 6
IRBs and New Policy for Clinical Trials … p. 7
IRBs and Use of “Real World Data” … p. 8
FDA: Researcher Ignores Exclusion Criteria … p. 9
OHRP: IRB Not the Responsible One But Has to Provide Documentation Anyway … p. 10
In Court: Accused Researcher Claims That His Opponents Were “Tainted” … p. 11
In Agencies & Organizations … p. 12
Compliance Conferences & Courses … p. 14

IRBs and Release of Individual Study Data
Back to Subjects … p. 3

We continue here with a topic that we began covering in last month’s HRR; namely, the release of individual subject data from studies. Obviously, this possibility can significantly impact upon the privacy of individual research subjects as well as affecting the informed consent forms describing such possible releases.

Hence, the way that researchers propose to release such data will be of major interest during Institutional Review Board’s (IRB’s) examination of applicable protocols. Note that this HRR article does not address the three other types of data release cited in the recent relevant report by the Secretary’s Advisory Committee on Human Research Protections (SACHRP) titled “Return of Individual Research Results.”

Those other three types of data release are defined as “Return of incidental findings to subjects,” “Return of general study results to subjects,” and “Public release of study data” (underline emphases added).

SACHRP considers those other areas to be complex enough on their own to deserve separate recommendations, which SACHRP plans for the future.

For the last three months we have been reporting on the major new policy issued by the National Institutes of Health (NIH) mandating the use of a single Institutional Review Board (“sIRB”) to review all study locations involved in any multisite trial funded by NIH. Although opposed by many IRBs and institutions, individual researchers and patient advocacy groups have generally supported the new IRB policy.

Ironically, said researchers may be surprised at the new related requirements that will impact them directly (see lead article, this HRR).

As we have noted before, the new NIH policy (effective on May 25, 2017) does allow for some exceptions. We now present more detail on the exceptions.

“The draft policy proposed exceptions only if the designated single IRB of record is unable to meet the needs of specific populations or where local IRB review is required by federal, tribal, or
state laws or regulations. Most commenters agreed that there was a need to allow for exceptions to the use of a single IRB. There were a number of comments calling for additional exceptions to those proposed in the policy“ (81 Fed. Reg. 40325-40331 at p. 40327, June 21, emphasis added).

This article focuses on yet another aspect of the new Institutional Review Board (IRB) policy issued by the National Institutes of Health (NIH) on the use of just one single IRB (“sIRB”) for review of multisite studies funded by NIH. NIH has stated that its mandate is intended to simplify multisite IRB reviews.

Others have charged that NIH’s intent is due more to its wish to simplify its own oversight of multisite reviews by reducing the number of IRBs involved with such research. The entities most affected by the NIH policy, IRBs and their parent institutions, are among the most vocal of those opposing the policy.

Regardless, NIH has ramped up its issuance of ancillary sIRB policies, including one that is the focus of this article. In an initial response to compliance community concerns on how the costs of sIRBs will be handled, NIH recently published a document titled “Scenarios to Illustrate the Use of Direct and Indirect Costs for Single IRB Review under the NIH Policy on the Use of a Single IRB for Multi-site Research.”